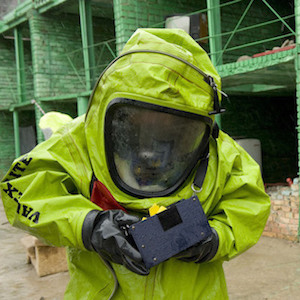 ‘When we started this project a little over a year ago, our aim was to put UN Security Council resolution 1540 firmly on the African agenda by increasing African engagement and taking advantage of the current momentum to better implement 1540 globally’.

This is how Noel Stott, senior research fellow at the Institute for Security Studies (ISS), describes the work of the ISS’ project that assists African states to prevent the proliferation of weapons of mass destruction and their acquisition and use by non-state actors. The ISS is the first non-governmental organisation globally to start a project dedicated to strengthening the capacity of African states to implement resolution 1540.

From facilitating dialogue and providing policy advice at the first African Union (AU) 1540 focal point training workshop in November 2014, to hosting a meeting of former 1540 experts in May 2015, the project shows no signs of slowing down. It has produced a monograph with over 100 recommendations for the 2016 Comprehensive Review, which will propose adjustments to the 1540 Committee’s mandate and operations to the United Nations (UN) Security Council. In September, the ISS, in partnership with the Intergovernmental Authority on Development (IGAD) Secretariat and the AU, played a key role in identifying priority areas for IGAD states to enhance implementation of resolution 1540 in the region.

‘We are adjusting perceptions and showing that Africa can take the lead globally in implementing resolution 1540’, says Nicolas Kasprzyk, ISS consultant and former 1540 expert. ‘As an African non-governmental organisation, ISS provides capacity building and policy advice at the highest international level’.

In October, the ISS was asked to brief delegates of the 1540 Committee in New York. The committee is one of the three UN Security Council subsidiary bodies dealing with terrorism. The ISS also co-hosted an event on rethinking resolution 1540 with the Stimson Center and the Washington Foreign Law Society.

Key contributions that the ISS will make in the near future include establishing a resolution 1540 civil society network in Africa, mapping African expertise in this field to build African and global capacity, updating the ISS’ resolution 1540 implementation guide for African states and considering border and export controls and domestic legislation activities.

In 2016, the project will continue its efforts to prevent non-state actors from acquiring or using weapons of mass destruction by supporting African states, the AU and regional organisations, as well as the UN Office for Disarmament Affairs and other partners.

ISS Today 26 August: In the debate towards nuclear disarmament, where are all the women?

ISS Today 26 May: Time for a new road map to nuclear disarmament?

ISS Today 19 March: Why is Pretoria so jealously guarding its fissile material?